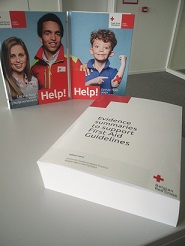 In the beginning of 2016 the first aid manuals 'Help! First aid for everyone' and 'Help! First aid for caregivers' were finalised. Both books are available at the bookstore. We developed 341 topic-specific evidence summaries and included a total of 721 studies. This resulted in more than a thousand pages of evidence summaries. The full guideline can be consulted here.

A scientific paper on the development of these first aid manuals and a systematic review on first aid for a tick bite, one of the topics in the manual, were published. Furthermore, we presented two posters at the Guidelines International Network (G-I-N) conference in Philadelphia, USA; one about the development of these evidence-based first aid guidelines for Flanders and the other concerning the time invested in this project. At the Cochrane Colloquium in Seoul, we gave an oral presentation on the number of Cochrane systematic reviews that were included in order to develop these guidelines.Since our initially developed African first aid guidelines from 2011 were getting out-dated (more than 5 years old), we updated these guidelines and new materials are now being developed by our local partners. Also, in light of this update a systematic review on first aid treatments for snake bites was published in PLoS Neglected Tropical Diseases.

In the beginning of 2016, an expert meeting about the first aid guidelines of the International Federation of Red Cross and Red Crescent Societies (IFRC) took place in the Belgian Red Cross headquarters in Mechelen. At this meeting, the scientific studies on which the guidelines are based, were placed in an international context and translated into practical guidelines. CEBaP was involved in the development of these guidelines, which have been published in the meantime.

In March, CEBaP attended an expert meeting in Kathmandu, Nepal, for the development of the Nepalese first aid guidelines (NEFAM). Together with a panel of Nepalese experts from different medical disciplines, experienced Nepalese first aid teachers and the Nepal Red Cross Society, the scientific evidence regarding first aid interventions was translated to the Nepalese context.

According to the World Bank, teaching first aid is highly cost-effective, 8$ per prevented DALY (Disability-Adjusted Life Year) to be exact. CEBaP investigated the scientific basis for these data. On the one hand we found that the average cost of first aid training is based on a limited number of studies. On the other hand, it seemed that the scientific basis to determine the effects of giving first aid training is very context-specific (e.g. studies performed in conflict areas such as Iraq/ Cambodia).
In order to scientifically underpin the cost-effectiveness of Belgian Red Cross first aid courses, an ‘Activity based Costing’ (ABC) model was developed, in collaboration with the Vlerick Business School, to estimate the costs of our own first aid courses in Nepal and Flanders. More research on the effectiveness of first aid training courses is needed to be able to develop a valid calculation of the cost-effectiveness and to adapt the number of 8$ per prevented DALY if necessary.

Substantiation of the medical questionnaire for blood donation

The International Journal of Clinical Transfusion Medicine invited us to write a review on blood donor deferral. In this review, an overview was made of the available evidence on the different donor exclusion criteria including their cost-effectiveness. A total of 7 systematic reviews were identified (including 5 of our own publications), 4 on donor safety and 3 about the safety of the recipient. Furthermore, 46 low quality observational studies and 16 Health Technology Assessments (3 on donor exclusion criteria and 13 cost utility analyses of interventions to assure the safety of the blood bank) were selected. No evidence was found for 60% of the 30 most common reasons of deferral in Flanders.

The Blood Service of the Belgian Red Cross is continuously

Allysa Kellens, general practitioner in training, defended her thesis on blood donation and epilepsy in May. Guided by CEBaP, she mapped the policy of blood transfusion centres worldwide on the acceptance of donors who used to have epilepsy. The survey showed that there is no uniform policy worldwide. Furthermore, she developed a systematic review of studies looking at the connection between epilepsy and adverse events after blood donation. Out of 7283 references, 3 studies were selected that could not show any negative consequences of blood donation. However, these studies were of low quality, so we urge for more research on this subject in the future. Both the survey and the systematic review will be published in a scientific journal soon.

Promotion of programs for improvement of sanitation and hygiene

In 2015, CEBaP started a project for which funding was granted by 3ie (International Initiative for Impact Evaluation) and WSSCC (Water Supply and Sanitation Collaborative Council). 3ie is an international NGO that provides subsidies to projects that scientifically support the policy and programs in developing countries. For this project, a systematic review was developed mapping the effect of promotional programs for behaviour change on handwashing and sanitation in developing countries. The project was coordinated by CEBaP and was conducted in collaboration with the Centre for Evidence-Based Health Care of the Stellenbosch University (South Africa). In 2016 the systematic review was performed: over 25,000 studies were screened, resulting in the selection of 41 quantitative (effectiveness) and 28 qualitative studies (implementation factors).
After data analysis, the first results were presented to a large group of stakeholders at a meeting in Geneva, Switzerland.

Results were also presented at the Cochrane Colloquium in Seoul in 2 oral presentations, one about the review of reviews to identify current evidence gaps, the other about engaging stakeholders in the development of a Theory of Change to support our systematic review. The review will be published in the Campbell Library in spring 2017.

Together with the Nepal Red Cross Society, we are investigating the retention of first aid knowledge and skills in laypeople. More than 400 people participate in this randomized controlled trial (RCT), which started in 2015. Participants followed a first aid course and received retraining after one year. Two years after following the basic course, their knowledge and skills will be measured and the influence of retraining will be determined.

In 2016, a study was started in Flanders to test if there is a significant difference between following a short course of 3 hours or a course of 12 hours on the knowledge of basic first aid skills 6 months after the course.

In collaboration with the EAWAG (university of Zurich) and the Malawian Red Cross Society, a study is performed in Malawi to investigate which factors (knowledge, attitude, values, skills and self-efficacy) influence or determine certain behaviour changes in water, sanitation and hygiene projects. If we know which factors prompt people whether or not to wash their hands before dinner or after using the toilet, for example, we can adjust our programs to make them more effective.

For over 10 years, the Belgian Red Cross has been collecting all data from people who are treated at a BRC first aid post during an event (festival, running races, etc.) in an electronic database. This database, MedTRIS (Medical Triage and Registration Informatics System), contains more than 200,000 patient data. Based on these data, predictive models can be developed which would allow the BRC to organize aid more efficiently during big events. Based on MedTRIS data, hypotheses can be formulated for future research. A first scientific publication about this database was published in 2016.